Why National Healthcare Continues To Fail

The data on the expenditures related to healthcare in America are alarming. National health care spending is growing at a rate of 5.6% a year. There are arguments that the Affordable Care Act (Obamacare) has curbed the growth of costs related to healthcare, others argue that it has compounded the growth in costs. The current system covers about 90.9% of the us population. 10% of the population would rather pay the tax penalty (typically less than $1000) than pay for health insurance (typically $600 to $1200 per month depending on income level).

Health Care as a Percentage of GDP


As you can see from this chart published by the National Health Care Expenditures, about 17.8% of the nation's Gross Domestic Product goes to pay for healthcare. Let me put this into perspective. The cost of heath care has reached beyond the cost of housing in America - According to data from the National Association of Home Builders, the percentage of GDP for housing is roughly 12% to 13% of GDP.

Obamacare has not slowed the cost of health care 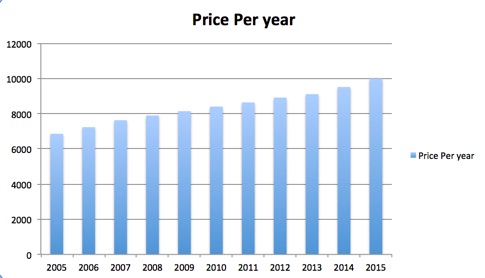 The Biggest Benefit to Today's Healthcare

Yes, health care cost in America have gotten worse. But, you must realize that health care is not available to every American regardless of prior conditions. No American can be denied health care coverage.

Perhaps a simple law would be the simple solution

The governments of America at the State and National levels believe that they can be the grand negotiator of health care. This is a false hope. Here is a simple concept that would represent the most fair distribution of costs.

Every citizen in America pays $6855 ($600 per month) for basic healthcare coverage regardless of age, sex, income, race, or any other discriminatory attribute. If you cannot afford to pay, you need to apply for federal assistance.

Retired People on Social Security will get hit hard

The average retired person in America gets $1425 per month from Social Security. That is about $17,000 per year. 50% of their social security income will go toward paying healthcare, making it difficult to pay for housing and food. Retirees would need to get creative to make it work. But it is possible. This group consumes the largest portion of health care costs in America.

According to the National Library of Medicine, the total health care costs per American is $316,000 over a lifetime. The average lifetime is 79 years - hence the cost is about $4000 per year - significantly less than than the $6855 being paid today. Not sure why the costs to not add up, but you know how it goes with these types of calculations - data has its limitation.

Healthcare is eating away at our Nation

Not only is healthcare eating away at the pocketbooks of Americans, but it is becoming an overwhelming consumer of the cost of operating the federal government. Social Security, Medicare, and other safety net policies in America consumer 59% of our federal tax dollars. 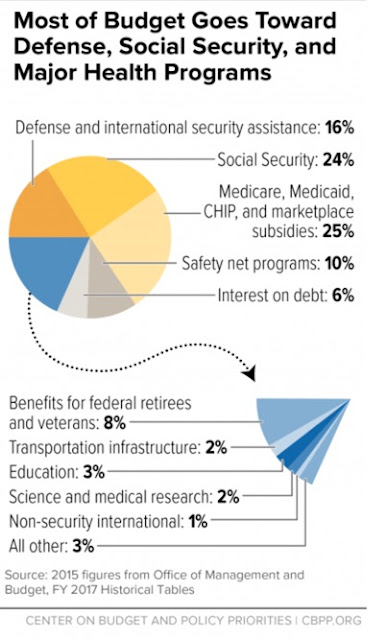 Why National Healthcare Continues to Fail

The average American pays about 19.8% of their income in Federal Tax today according to Time magazine. And remember, over 25% of the cost of operating the Federal Government - healthcare - is going up at a rate of nearly 6% a year. In an of itself, these rising costs would require raising Federal taxes by 1.5% a year.

If you want to win an election today in America, you better be focused on how you will cut taxes. The American voter does not trust the government to manage money and budgets. They prefer to have the national market economy do that. Voters in America do not trust the government to manage the $650 Billion dollars a year that is paid out to healthcare providers. America is in a place where if someone wants to get elected, they need to sell false hopes to the American voter. American need to face reality.

American's pay roughly two and a half times the price for health care as other developed nations around the globe. 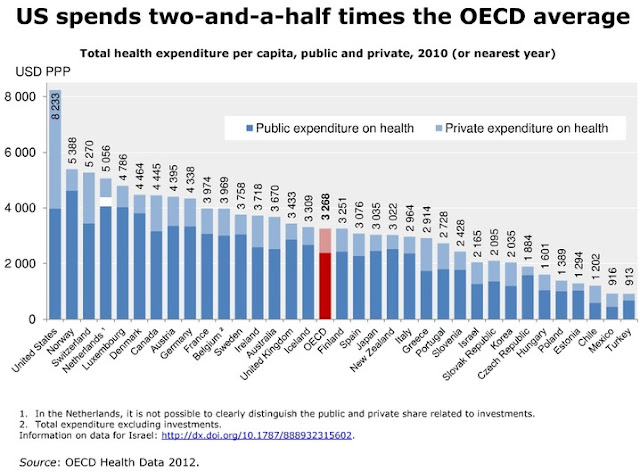 The average developed county in the world spends about $3200 per citizen for healthcare coverage. Just to our north, Canada spends $4400. The United Kingdom spends $3400. Japan spends $3000. To our south, Mexico pays under $1000.

Perhaps our best plan would be to outsource our healthcare to one of these other countries. Rather than building boarders, lets make healthcare a product of North America. Let the Canadians and the Mexican governments come up with a healthcare plan for North America - they might do a better job.

P.S. I would definitely prefer to rehabilitate in Cabo San Lucas after a major surgery!
Labels: federal budget healthcare politics