Taking more than you give

No matter how you look at it, Sequestration is going to hurt - and the more we delay the necessity to reduce government spending - the more it will hurt.

There is no doubt. Citizens who have been adorned with heavy handed government programs will feel the loss. Everybody will. Our economy will contract again as a result of the government spending cuts. The fed will be putting less money into the economy and the revenue of all businesses will decline. Here is the conundrum. When that happens, the secondary effect is a reduction in profits, which leads to a reduction in tax revenue, which leads to a greater deficit.

8 years ago (3/02/05), then Fed Chairman Alan Greenspan told the House Budget Committee that the US government needed to undertake “major deficit-reducing actions.”  Greenspan said “I fear we may have already committed more physical resources to the baby-boom generation in its retirement years than our economy has the capacity to deliver” (source: Federal Reserve).

MORE COMING OUT THAN GOING IN – An average high income American couple that retired in 2010 will pay $156,000 of lifetime Medicare taxes but receive $387,000 of Medicare benefits, i.e., for every $1 paid in taxes, the couple will receive $2.48 in benefits (source: Urban Institute).

MORE GOING IN THAN COMING OUT – An average high income American couple that retired in 2010 will pay $765,000 of lifetime Social Security taxes but receive just $693,000 of Social Security benefits, i.e., for every $1 paid in taxes, the couple will receive $0.91 in benefits (source: Urban Institute).

Remember - this is not a Republican vs. Democratic thing. Every President of the United States inherits the economy established by the prior administration, senate, and house. It is rare for one party to control all three prongs of government. The spending increases that are crushing us today were passed during the Bush Administration. Bush traded tax cuts (Republican agenda) for spending increases (Democratic agenda) to win the support of the democrats to pass the budget. By the way - we are still operating under the Bush Administration budget. The Obama Administration has not been successful at getting a budget passed since he took office. Interesting note - Obama budgets submitted in 2012 and 2013 made some records - the 2012 budget was voted down 97-0 in the Senate, and his 2013 budget was voted down 414-0 in the House. 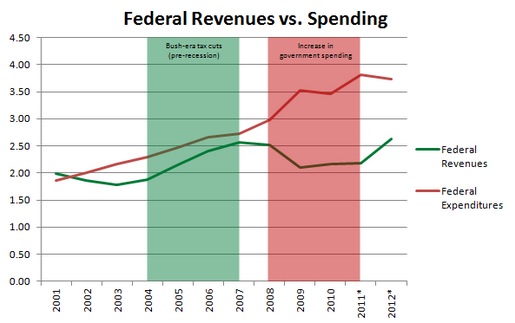