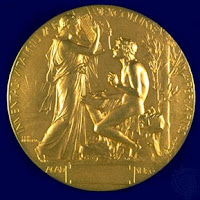 Alfred Nobel led an impressive life. He spoke 5 languages fluently by the age of 17. He was incredibly well educated in literature, poetry, chemistry and physics. His father is often cited for directing Nobel as a man. His father was an engineer who pioneered military advancement like naval mines. Shortly after Alfred graduated from college with a degree in chemical engineering, he invented and patented dynamite in 1867. This invention led the young man to develop manufacturing of his product at factories that he owned and managed worldwide. His fortune was made.

I would like to think that Alfred's mother played a significant role in his life. Somewhere, somehow, he became convinced that all of his life's work should be invested to bestow a 5 monetary prizes to the individuals who, in the preceding year, conferred the greatest benefit to mankind. These prizes are awarded for physics, chemistry, medicine, literature, and peace. The Nobel Prize. He gave his entire worth to endow the award in his will. Something that his family contested until 1901.

I imagine that Mr. Nobel led a conflicted life knowing that his invention was used both for good and evil. For every blast that cut through rock to build a road, another blast was used by an army to kill an enemy. It is legend that he believed that the only path to peace are equally armed nations. There is support for his belief. The nuclear arms race has prevented world wars, at least for now.

Alfred Nobel will continue to reward the greatest minds on our planet until monetary gain and peer recognition are no longer considered prizes. By abstraction, I doubt that the Nobel Prize for Literature is any form of incentive.  Gabriel Garcia Marquez certainly did not compose his novels with such a prize in mind. Nor did Samuel Beckett, Jean-Paul Sartre, Albert Camus, William Faulkner, Sinclair Lewis, Earnest Hemingway, or them many other great writers whom I have grown to adore. Perhaps calling it a Prize was a mistake. The Nobel Gift for Literature may be more appropriate.

This year, the Nobel Prize for Medicine awarded to biologist Francis Crick was sold at auction for $2.3 Million. Crick was born in England in 1916. He had something that bound him to Alfred Nobel. During the war, he worked with magnetic and acoustic mines (like Nobel's father). His Price worthy act was discovering how nucleic acids play a role for information transfer in living material (why cells do what they do and the significance of DNA). Crick died in 2004. It seems a little ungentle that the family sold the prize. Perhaps Francis should have learned a thing or two from Alfred Nobel about writing wills.