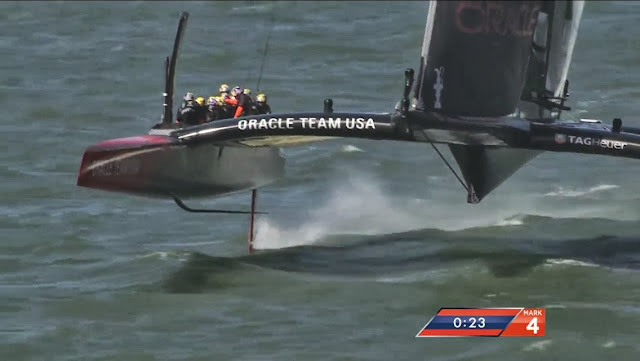 Sailing is a minority sport in America, but a great sport around the world. The top game of the sport is the America's Cup. For those of you that know me, I was fortunate to race with Jon Ziskind for many years on a J-24 called Pipe Dream. The boat was sponsored by Shore Sails of Newport, RI and it was campaigned around North America. The J-24 in the mid-90s was among the most competitive fleets in boat racing with piles of sailors that you now see on the America's Cup teams.

Jon Ziskind was fortunate to be on a number of AC cup teams including America True, then three tours with Team Oracle. He was a trimmer and became a team coach before launching is now successful startup, Zos Communications. Jon made me the best sailor he could during our years together, and I am forever grateful.

This America's Cup regatta has been one for the ages. Typically the series leading up to the America's Cup features the best sailing, but this year, the finals has had it all. It began with Team Oracle USA entering the cup down two points. A couple of crew members put some extra weight on their AC42 boats which was cheating. They were dismissed from the team; Team Oracle paid a $250,000 fine by way of charity; and the team was docked two points.

It looked like the finals were going to be a blow out. Team New Zealand got out to a 8-1 lead, only needing 9 victories to win. Since then, Team Oracle USA has won seven races in a row with their backs up against the wall. The points stand at 8 a piece going into today's race at 1:15 PST. It will be on TV, but I find the America's Cup Mobile App to be excellent. You can watch live streaming video and listen to the announcers, or you can tune into the audio on the boat to enjoy the communications between skipper and tactician. Even if you are watching on TV, download the app and watch the race using the virtual eye feature.