I had a curious chat with a friend yesterday. He is in his early 50s and the story he relayed to me referenced his father, presumably retired in his 70s or 80s. With passion my friend conveyed the lessons of his youth, which flourished with impassioned equality for all races and religions. With great lament, he also shared how his father has changed over the years. He switched teams and is now an R instead of a D. Even as a scientist, his father no longer acknowledges the particulate matter that industry has deposited in our atmosphere to create a greenhouse effect and contribute to global warming.

“Your dad was successful,” I commented. “Taxes have a way of changing a man.”

“Yes,” he replied. “And now I am beginning to see the tears in the fabric of my long held beliefs,” he added.

If you are a friend that follows this blog, you know that I party with the Democrats on social issues, and party with the Republicans on fiscal issues. I am an independent because I think we desperately need a third party in our nation that gives me a voting platform. Like so many others, I hated both options in the last election.

The Tax Burden to American Businesses is the highest in the world.

You will hear this again, and again, and again as President Trump opens the door to tax reform. He is accurate. According to the OECD, the United States taxes corporations at 35%. But the data is a bit misleading because we have a complicated tax code with deductions. After deductions, our tax rate is the 4th highest in the world, falling in behind Argentina, Japan, and the United Kingdom. The United Kingdom charges 19% but does not have the deductions. Other taxes like sales tax, VAT, and State Taxes are not included in this calculus. Trump is recommending 15% tax rate but has not discussed deductions.

There is an ugly truth behind all of this data. It’s shaped by politics. If I wanted to combat Trump’s position, I would indicate that as a percentage of 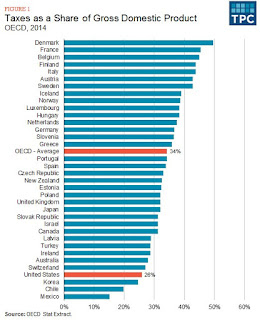 Our retirement will suck

I feel deeply for my friend. To watch a father become overwhelmed by taxes, low yield on savings, and rapidly escalating health care costs is real. When you are retired, the more you have the more they take. Retirement is a personal tax issue, unless you have investments on your savings. When you see profitable companies write a check to the federal government for 35% of the profit before paying dividends, it hurts. If you take the approach of many retirees who have low risk portfolios, interest on cash and bonds is less than inflation. Just holding your money generates losses in value. As for healthcare – it’s free to those who have no assets and more than the cost of a mortgage for those who have been saving their whole lives.

I understand his father’s curmudgeonous view of the world. He probably worked 10-hour days his whole life. He probably sacrificed life’s indulgences he earned for the safety and security of savings in retirement, only to see more and more of his savings taken from him because of his success.

America has lost its sense of equal opportunity. We are not all equal under the tax law or the health care law. Some get more than they give and others give more than they get.

My Utopian Tax Code
As for me, I would love to see the removal of all corporate taxes. The government could set a threshold of reserves – say 6 months operating expenses. After that, corporations must distribute all profits to shareholders or employees. That goes for State taxes on corporations, which are not even discussed by the OECD. All income should be taxed at an individual level and it should be equal for all citizens (FLAT TAX) regardless of how much you make. Remove all personal deductions too. Remove cash. All money should be electronic to remove the incentives to cheat. Illicit business would need to transact in goods or services rather than money. Lets see you buy your next dose of heroin with a used set of golf clubs or your favorite chair. All healthcare should be priced the same too – one price for every citizen.

It’s too bad that my friend’s dad has lost his liberal spirit. I wonder if he would agree with my thesis for utopia?
Labels: federal budget healthcare politics taxes
Location: Arroyo Grande, CA 93420, USA