Alexandra Lund in the news 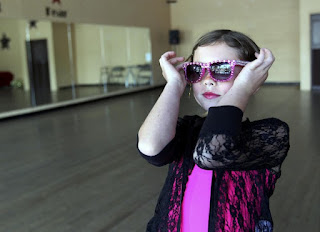 It is the week of Fathers Day, I could not be more proud of my daughter who is on the cover of our local newspaper. Here is the article: http://santamariatimes.com/news/local/tiny-dancer/article_434d76fe-b386-11e1-8f97-001a4bcf887a.html

Every 9-year-old has her dreams, but Alexandra Lund of Arroyo Grande is living hers.

Lund’s regional competition success allows her to advance to the national finals July 13 to 16 in Las Vegas, Nev. There, she will compete against other 8- and 9-year-olds for the title of national champion.

“It’s so fun to watch your child find that one thing in life that they really can’t do without, and she’s been fortunate to find it,” said Alexandra’s mother, Marilyn Lund.

Nearly 700 dancers took the stage in the elite dance competition, whose faculty and judges are professional dancers, many from the popular television dance shows like “So You Think You Can Dance.”

This year’s “So You Think You Can Dance” judges included Kent Boyd, from season 7, and season 5 stars Ade Obayomi and Melissa Sandvig.

Other judges at the event included Hollywood Vibe owner Christopher Smith, whose film career spans hits like “The Wedding Planner,” “Rent” and “Annie.”


Joining Smith is legendary tap superstar Mark Goodman, who is known as Gregory Hind’s sidekick and received accolades for his tap performance in the feature film, “The Polar Express.”

Alexandra and teammate Tyler Riekki were among the five junior dancers from the Northern California region to be selected to Team Hollywood Vibe. As members of the elite company, the dancers are invited to join the Hollywood Vibe tour throughout the nation.

This is Alexandra’s third-consecutive score of platinum, requiring an average judges’ score of

96 percent or higher, for her solo in competition.

Earlier this year, Alexandra placed eighth overall at Hall of Fame. Her platinum score at Hollywood Connection dance competition qualified her to compete for their Icon of the Year Award and an audition with talent management agency DDO Artists Agency.

Alexandra was not alone in her success at the recent contest. Jordan Clark, one of the senior dancers for Dellos also received a Platinum Award for his unique solo titled “The Composer.”

In addition, DPAC earned several awards during the weekend’s competition. One of the company’s hip-hop dances, called “Bring Back Double,” was one of four dances selected for the coveted award of Battle of the Stars competition. The placement qualifies DPAC to compete against the most highly rated dances from across the country in the hunt for the Best Dance of the Season Award.

In all, the studio received seven top overall awards in the junior division, the highest number of awards provided to any studio at the competition.

“It’s not like dance when I was growing up,” Marilyn said. “We used to practice once a week, and that was enough to be competitive. These dancers spend four or five nights per week rehearsing, plus full-weekend rehearsals once a month. It can get a little crazy, but that’s what it takes to compete now.”

Alexandra, dubbed “Sparkles” by her teachers and peers for her positive attitude, first took dance at Academy of Dance in San Luis Obispo. She was 3 then and all about ballet and tutus.

Last year, at the insistence of friend Camille Cattaneo, Alexandra attended DPAC’s summer dance camp. Shortly after, she made a permanent switch.

“I really liked the school and wanted to explore the different classes and styles of dance,” Alexandra said.

Since joining DPAC, Alexandra has been a company dancer under the instruction of studio owner Johnna Clark and teacher/choreographers Tahirih Ellison, Marco Cruz, and Jillian Clark. She is also an honor student at the Laureate School.

Ultimately, Alexandra would like to be a professional dancer. Whether or not she attains that goal, her parents said they are happy with the lessons taught by dance.

“When you understand what passion and commitment feel like, then you can transfer that to anything you want in life,” Marilyn said.