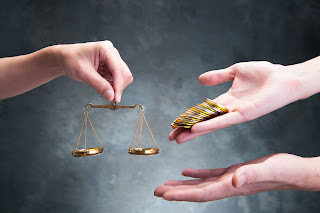 During my life, I have become increasingly anti-political. In America we have a system that is broken. Our heartfelt and sincere efforts to provide a safety net for our citizens, national sovereignty, and economic stability have all failed. I believe that it is because of the corrupt political system we have in our nation.

The United States has a failed political system. Last week a political party induced over $1 Million dollars into a campaign for our local State Assembly race. There are 80 members of the California State Assembly, and one particular party is a few seats away from establishing a Super Majority. In American politics, a Super Majority is akin to a dictatorship. This is an example of an insanely overfunded political war chest that seeks to “buy” elections in America.

Have you ever wondered what happens to all of the money that is left over from political campaigns? Look no further than any past President, Senator, or other government official to see the rancor of this grotesque system. That money is used to legally bribe people in office. It is used to sway votes, and to control the legislative process. Its called Crony Capitalism.

Obamacare Supermajority Case Study?
Obamacare, President Barack Obama's overhaul of the health insurance system, needed to pass through both chambers of Congress to become a law. The seeds for this passing were sown during the 2008 elections. That evening, the Democratic party came away with a 257 to 199 seat advantage in the House, and Obama was elected president.
In the Senate, the Democrats gained eight seats to hold 57 out of 100 seats. At the time, there were two Independent Senators, and each was expected to vote for the law. The Democrats needed one more seat in the Senate to gain a supermajority, which is 60 seats, and ensure that the Republicans would be unable to block the passage with a filibuster.
This 60th seat would come unexpectedly, when Senator Arlen Specter of Pennsylvania switched his party affiliation from Republican to Democrat on April 28, 2009. On December 24, 2009, the Senate passed the Obamacare bill by a 60 to 39 vote. It would take another three months for the House and Senate bills to be reconciled. President Obama signed the ACA into law on March 23, 2010.

Democracy did not pass that law. The controlling political party with a super majority in the Senate and a sitting President did that. The legislation is not a failure. Anytime you spend $1.7 Billion on something you get some results. What this exemplifies is the failure of our political system that allows a single agenda to pass without influence the process.
Want to know about some of the bribes issued when Obamacare passed?

The American political system is corrupt. Our citizens should be appalled. If you want to see Organized Crime in America – look no further than our lifelong politicians.

I have voted for the 2016 Election. My 13 year old daughter and I have discussed the issues. She already sees the impact of taxes in the money she earns as an Actor and Dancer. She has filed her returns for the past three years. She understands that 45% of Americans do not pay any income tax. She asked me "Are 45% of Americans destitute today, living without basic necessities?"

"Well, everyone I know has a cell phone, drives a car, has nice clean clothes. I know that there are a handful of kids who are homeless - but nowhere near 45%." Alexandra attends a High School with more than 2400 students. "Is the Government paying for half of the people I go to school with to have  a home, clothes, a cell phone," she asked?

"I don't know," I replied. "What I do know is that your mom and I work very hard and pay more and more each year in taxes and healthcare costs. It limits our ability to invest in growing our business to create more jobs or increase wages for the people that work with us. And, we have been saving since you were born to try to put aside the $350,000 that it will cost us to send you to college."

"With any luck, you will follow your father to Oxford, Price is only $19,000 per year for foreigners, and its only a three year program" I suggested.

Our military is to protect our citizens and participate in NATO led relief efforts. We have gone so far beyond this mission, acting at the police of the globe. Enough said.

Our economic stability in America is a complete sham. Look at the huge drops and falls that are created by this artificial, overly regulated system. Government needs to stop influencing our economy with deficit spending and corporate welfare.