Life on the Razors Edge 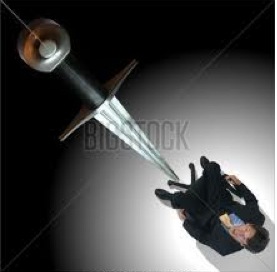 Allow me to make a point. On this day in 385 B.C. (according to my clay tablets), a man was granted a wish that he later wished he hadn't wished for. This all took place in a place called Syracuse…..which…..this being the B.C. days and all…..not only did not yet have a Carrier Dome; it was not even located in upstate New York. This Syracuse was a colony of the ancient Greeks and was located on the coast of Sicily.

The head guy in Syracuse at the time was a certain "Dionysius." He was the fellow who granted the above-mentioned wish. This was easy for him to do because he ruled all alone without Council or Advisors. The Greeks had a name for such a solitary ruler…..the word was "Tyrant"…..which has taken on a rather negative connotation in recent years…..or so we hear.

Anyway, Dionysius had this associate who kept telling him how lucky he was to be a Tyrant and how great the Tyrant lifestyle must be. After a few years of "Gee, Dion, what a lucky guy you are, I wish I lived like you!"…..Dionysius decided to give his pal a taste of the Tyrant lifestyle business.

He put his staff at his pal's disposal. They bathed him…..oiled and scented his body (after a rubdown)…..dressed him in the finest clothes…..and seated him at the head of the table at a very lavish banquet attended by the crème de la crème of Syracuse. The guest of honor was just getting into the fun of it when he noticed the banquet guests were talking to him but not looking at him. They kept glancing up at the
ceiling high above his head.

He looked up and saw that Dionysius had placed a huge, razor sharp sword above him and that the sword was hanging (and gently swaying) from a single horsehair. When he tried to get up, Dionysius had him restrained and said, "My friend, Damocles, how do you enjoy the role of Tyrant?" The point being
made, the banquet ended and the phrase "Sword of Damocles" took on a meaning that has lasted for over two thousand four hundred years.

It actually has several lessons…..don't envy the other guy.....death or anger may strike at any
moment….and playing the Tyrant is not really as rewarding as it may seem and may cost you friends.

Next time you envy someone like a political figure, a CEO, your boss - look above their head and appreciate that the sword above them does not sway above you.
Labels: business management leadership philosophy politics
Location: 291 Falcon Crest Dr, Arroyo Grande, CA 93420, USA