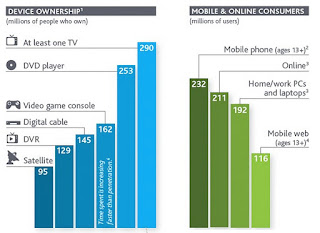 Very interesting report out of Nielsen Today. They show the penetration numbers for how consumers use Television, Mobile, and internet.

Clearly Television is the leader. It has been around since 1920 - quite a run - currently reaching 290 Million people in America over the past 90 years.

By Contrast - the Internet did not start to be commercialized until the early 1990s. In in its short 20 year life it has grown quickly - up to 211 million people. In some way, I think that the internet bubble was not really a bubble. The growth has been enormous.


Mobile is even bigger than the internet - reaching 232 million people - an is likely to be the the first to pass television in adoption. Mobile phones emerged about the same time as the Internet - also about 20 years old.

But everything is growing faster. Take a look at mobile web - 116 million consumers have adopted already. This has happened since 2007. Outrageous Growth.

But wait, there is more... Marketing Charts released the results of a Deloitte survey today that indicates that 9% of consumers have cancelled pay TV in 2011 (about 28 Million) and are getting their TV from the Internet. Moreover, another 11% say that they plan to cancel their plan in 2012 (another 30 Million).

By my charting, it would seem that television is on a path to be overtaken by mobile and internet by 2015 or 2016.

The links to the dates showing when these technologies evolved are links to Wikipedia - it is interesting to read the descriptions - be sure to take a peek.

Take a look at this article from Nielsen.